It’s a shocking fact that 59% of the UK’s dogs are classified as overweight or obese, according to the most recent study[i] into the subject.

Robin Hargreaves, former British Veterinary Association President and Vet Panel Lead at Agria Pet Insurance, explains that sometimes the link between pet obesity and human mental health can be stronger than we think.

“Problems with pet obesity can often stem from the owner’s own relationship with food. An example of this at my practice demonstrated these complexities very clearly. One of our clients had a rescue Staffy that had become very overweight. We’d discussed diet and exercise, and prescribed diet food, but the dog just wasn’t losing any weight. It was only during a home visit that we discovered he was allowing his dog constant access to a bowl of Smarties on the floor...!

“It transpired that the owner felt he had rescued his dog from a former life of ‘torture’ where this once fit and lean dog ran up and down a big hill each day with his owner.

“The adoptive owner really loved that dog, and his actions of ‘saving’ him from this daily physical torture, and feeding him unlimited Smarties, were his way of genuinely thinking he was doing his best; replicating his own relationship and feelings towards food and exercise onto his dog.”

While the image of an underweight dog being taken into rescue is possibly more likely to come to mind than one that’s overweight, rehoming organisations are not immune from dealing with obesity either.

Lulu, a six-year-old chocolate Labrador, was taken into the care of Edinburgh Dog and Cat Home in July 2018. She had balding fur, bad ears and was very overweight. The Home’s staff quickly went to work and provided Lulu with all the veterinary care she needed.

She was given regular medical baths, steroid ear drops and had two lumps removed from her body. She was also spayed and given all necessary vaccinations. Throughout her various treatments, the Home’s devoted kennel staff worked hard to reduce Lulu’s weight, often taking her for long walks on the beach and to a local nature reserve, where she could spend her days walking and running around the beautiful surroundings. During this time, one of the kennel staff members, Lucy, fell in love with her. Happily, Lucy rehomed Lulu in January this year and the pair have been inseparable ever since. 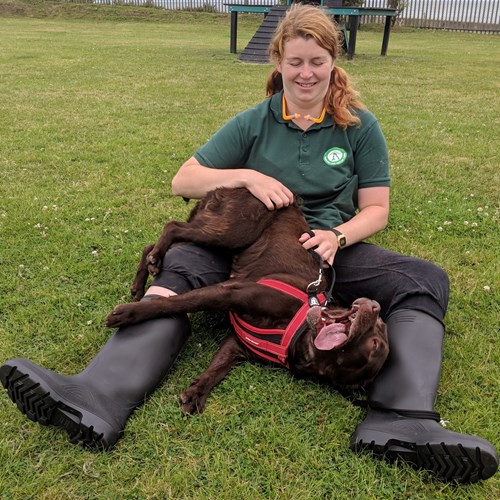 Helping the animals that enter rescue care so they’re ready for rehoming can be very costly - whether that’s dealing with obesity, malnutrition, behavioural problems or simply caring for them while they wait for their forever home.

The Agria Dog Walk is set to unite thousands of paws across six countries, all on one day, to help raise much-needed funds to help dogs who need it most!

On Saturday May 25th 2019, walks will be taking place in several locations in the UK, from Edinburgh to Devon, as well as Norway, Sweden, Denmark, Finland and France!

Each walk is linked to a local rescue, and for every dog that’s walked, Agria Pet Insurance will donate £5, directly to that rescue. So, while it’s a Europe-wide event, every dog that takes part will be directly supporting their local rescue, helping to change the life of another that isn’t yet as lucky as they are.

Lulu’s rescue, Edinburgh Dog and Cat Home, is one of the rescues hosting an Agria Dog Walk. To join their walk, or find one that’s local to you, visit https://www.agriapet.co.uk/agria-dog-walk/ - and make sure you round up friends and family, and their four-legged friends, to join in too!