“So many times, Agria has given me the peace of mind to continue as a breeder, helping me out three times just this year.  Once was for emergency abdominal surgery on Viktori which saved her life.  Another for show cat, Tyga, who had extreme sickness which required a drip for five days. Then finally, a one week old kitten called Lord Darnley, who could not poop.  A one week old kitten you say?  Yes!  Under the breeder cover for the queens, even their kittens are protected until they leave home at 14 weeks with their own 5 weeks’ free Agria Pet Insurance policies.

“We know our kittens leave with the best cover and, although you never wish anything to happen to them, things do. We feel safe too that all kittens are covered for death and it is an ‘opt out’ feature – not ‘opt in’.  This is especially poignant when we lost a kitten from another breeder with no death cover automatically in place.

“Breeding is very hard, expensive and, even when done correctly, can still go terribly wrong. That’s where insurance has its place, like the time when my home-bred queen, Maystarex Queen of Scots, was having her first litter. The first kitten was born and her mum produced copious amounts of blood. Poor Flaire, as she is known at home, was exhausted and rushed to the vets.  They tried kick-starting her system with drugs, but they were losing her.  She was quickly taken into surgery and despite all the upset came three tiny lives and thankfully, Flaire! 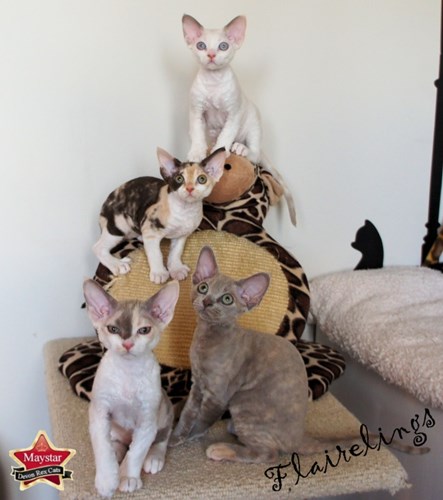 “A few days later the little family of four baby girls and mum got their strength back.  At the time I just paid the hefty out of hours vet bill on my credit card and it was only I checked the policy booklet and found Agria would pay towards this. Brilliant!

“Insurance is always there as a safety net and even though some Maystar cats have never used theirs, Agria has certainly been there for the ones that have and, in some cases, many times over for the same cat! I know the bigger stuff in their lives is taken care of and the cats can concentrate on the smaller things in life – like chasing bugs - and I am safe in the knowledge that Agria Pet Insurance covers them like an invisible shield – even for a bee sting!”