Earlier this year, Phil Tsang had a litter of beautiful yellow Labrador puppies with his bitch Richbourne Crystal Clear, or Minnie as she is known at home.  Minnie is a descended from Champion lines from breeder and secretary of the Yellow Labrador Club, Sussie Wiles.

It wasn’t Phil’s first litter; he and his family have bred Jack Russel Terriers for many years. And even though Phil is an experienced breeder he wanted to ensure that he did his best by Minnie for her first litter and to try and do everything the right way and by the book. Phil had done his research and decided to insure Minnie with Agria due to the excellent breeding risks cover that can be added onto your pet’s policy.

One day Phil noticed Minnie giving typical signs of nesting, she was digging holes, hiding in the garden, heavy panting and pacing.  Exciting signs and it looked like the pups were on their way!

Phil was under the impression that Labradors don’t often have issues during labour, but sadly things were not going to go as smoothly as he had hoped. Labour had gone on for 7 hours and Minnie had produced 7 chunky, healthy pups, but poor Minnie was still having contractions.

After monitoring Minnie for a further 2 hours, it was clear to Phil that Minnie might be in trouble and at that point every minute was vital for Minnie and her puppies.  Phil sought veterinary attention for Minnie and following the examination the veterinary surgeon advised Phil that 2 puppies were stuck and would not be able to be born naturally.

Without further delay Minnie was taken to surgery for a caesarean section and all hands were on deck to ensure Minnie’s puppies could be saved.

Very sadly a puppy that had become stuck in the birth canal was still born but thankfully due to Phil’s knowledge, decisive actions and the expertise of the veterinary surgeon, Minnie delivered a further healthy puppy by caesarean section. 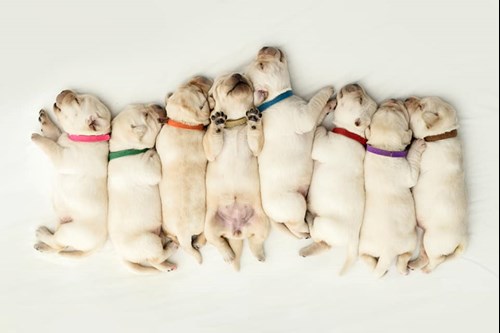 Now the 8 surviving pups are all growing up fast and have gone on to carefully selected new homes with 5 weeks free Agria insurance. All except for Blue, the largest of the litter who Phil, his wife Anly and their beautiful son Elijah have kept!

Phil’s experience really brings home the importance of Agria breeding risk cover for peace of mind and reassurance for you and your pets, both dog or cat.

The Animal Welfare Regulation 2018: The breeding and selling of your litters and how it affects you

Support is at hand for the hardest goodbye