At Agria, our team is full of animal lovers. From equine enthusiasts to cat lovers, agility competitors to rescue volunteers and even shepherdesses, we have a great passion for animals! We are currently super-excited for two of our team members, Sarah White and Mark Walden, both successful dog breeders who are competing at Crufts next week!

We’re wishing them the very best of luck as we’re so proud of their achievements, and wanted to share an insight of them!

I grew up with dogs since I was practically a baby. My grandparents show and bred Beagles since 1974 and from as young as I can remember I always got so excited when I visited as I could not wait to see the puppies! My gran always used to say that the key to their placidness and good temperament came down to the grandkids interaction with the puppies! 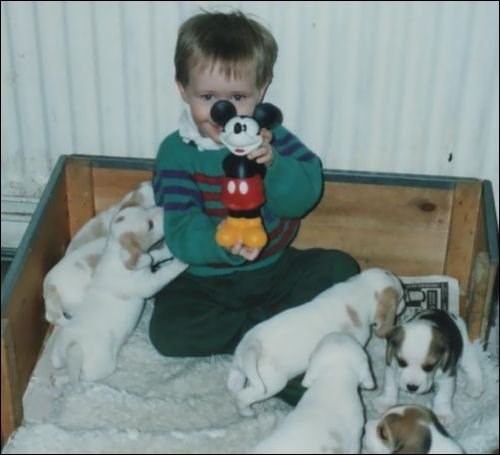 I think one of the best ways to gain life experience as a young child is to be around dogs. It teaches you to be compassionate, empathetic, patient and provided me with so much appreciation at how magnificent these creatures are. They gave so much to me that I always felt obligated that I should give something back in any way I could. Working for Agria and volunteering for Kennel Club Breed Rescues for over 10 years was a way I could do that.

Here is a short timeline of my life with dogs:

Our kennel name is ‘Nedlaw’ (Walden spelt backwards!) and we have made many achievements.

This is Ch Julemark Hotspur By Nedlaw handled by my gran, Patience Walden. He won Best in Show at Windsor in 1992 and later won Best of Breed at Crufts two years in a row. 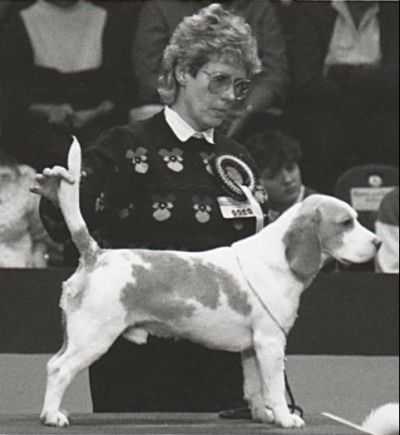 Among producing many champions, our Ch Nedlaw Barbarian below not only was a Champion himself but went on to produce 13 champions – and still counting! And this year at Crufts, my boy Quincy is competing on Hound Day. 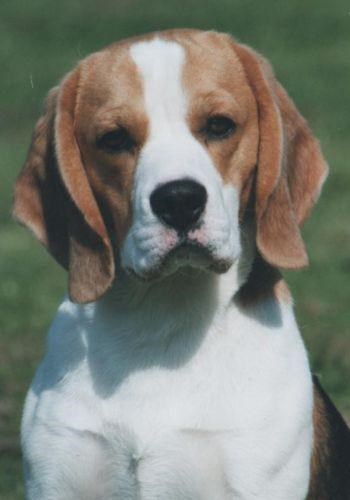 After the passing of my gran in 2018 I will be inheriting the Nedlaw Kennels and I am keen to continue our heritage in the years to come.

I grew up with a mother who had a love for all animals… it’s in my blood; I’m the eldest of 6 kids and we all have at least one dog!

Growing up in the valleys of South Wales, I was very lucky to have horses, ducks, chickens, rabbits, guinea pigs, hamsters, dogs, cats and even a goat!

In terms of breeding, I started off with hamsters when I was 6. I loved it and sold them for pocket money. I had quite a few of them and loved each and every one of them, especially the ones that were bred by me.

Mum had been dog and horse breeding since the age of 18. Her first ever litter of dogs being a West Highland White Terrier litter. She had the bitch, Candy from a breeder and had qualified her for Crufts, but at that time mum didn’t have an intertest in showing.

Next, she had Lakeland Terriers from the wonderful Miss Biddy and the famous Kelda Kennels, plus German Shepherds who were grandchildren of the Gorgeous Ramacon swashbuckler who won Crufts Best in Show 1971.

She ran a riding school and these breeds were great companions at the stables. Even though they were all pure-bred pedigree dogs from show-quality kennels, mum didn’t have an interest in showing at the time, she just loved owning dogs.

She saw her first Borzoi at the age of six, Chekov, a big red and white male, and she fell in love. From that moment on, she promised herself that one day she would have one! And she did.

As far as showing, it wasn’t what mum intended to do, until we brought in a Borzoi bitch, Dekaos Miss Saigon Of Mischran (Ziggy) who had qualified for Crufts. Mum thought ‘Oh well, we may as well take her!’ and did. She had no idea what she was doing or what was going on and just went with the flow, she had a 3rd in a large class and that was it, the show bug had bitten! The rest is history. Ziggy became our foundation bitch for the Mischran kennels. 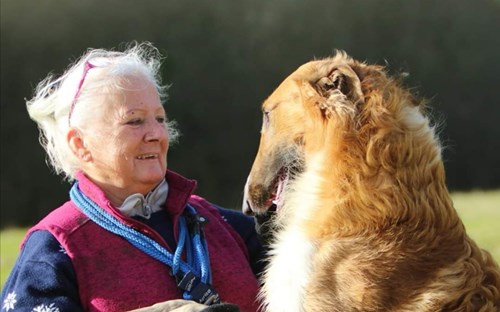 The Borzoi is my favourite breed of dog. Even though I love all dogs, the Borzoi is just so unique. They are graceful yet strong, stubborn yet loyal, regal yet goofy and so beautiful, and to see one in full flight out running in an open field is my favourite thing to see!

One day mum sat me down and said, ‘Sarah, I don’t think you will be able to have one from this litter, maybe when you’re older. You will need to pick something else for Christmas.’ So reluctantly I picked a Miss Scarlett classic Barbie doll from Gone with the Wind. I thought fair enough, I can’t have one this time, but I will when I’m older.

Christmas Day, I opened my presents, I didn’t have a Miss Scarlet Barbie doll. Mum and dad came out with an extra present that was kept behind for me… I felt it and it was all soft, it was a huge cuddly Old English sheepdog teddy bear with a real dog’s collar and lead. On the collar it said, ‘If I won’t quite do, look in the kennels’, well I looked around for a bit as it didn’t sink in and mum and dad explained… I was sooo happy! I remember getting up, putting my wellies on and running down the garden into the kennels. I felt like the luckiest girl in the whole world! I was having one of the Borzoi puppies! I picked a little girl and I named her Mischran Miss Scarlett, after the Barbie doll I reluctantly picked as a substitute for not having a Borzoi of my very own. That year she qualified for Crufts and I was so nervous, but I loved it. I was showing my own Borzoi!

There is something about Crufts like no other show. The lights, the crowds, the buzz, the atmosphere, the cheers and that famous green carpet. I love it because the show rings are large and with a big breed you can really run out and show them off and show their movement to its full potential.

Showing isn’t the be all and end all for me, I love it, but I also have dogs at home that hate it, so I won’t put them through it if they don’t enjoy it. They are my pets and companions first and foremost. It’s supposed to be fun and it’s supposed to be a hobby but, when you have a dog that loves it at much as you do, it’s pure magic! There is nothing like the feeling of teamwork between a handler and a dog, you can feel them on the end of the lead and you know that they are just enjoying it, they love being shown off and have that ‘look at me’ glint in their eye, that x factor! 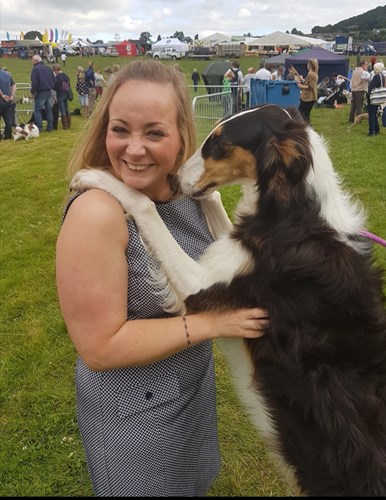 I have been involved with breeding dogs all my life and I am proud to be part of the Mischran kennels alongside my mum and dad. We take great pride and careful consideration in the breeding of our dogs. I love the fact that we have a future plan, I learned this from mum, she has taught me a lot over the years, as did the late Margaret Manning, from Manitias kennels, who also was a mentor to both mum and me.

Margaret took the time to explain things and never made me feel stupid or that because I was a child I was to be ignored or not respected. This is so important within our hobby; we need to nurture and support the younger generations. I love mum’s vision and what she has taught me, she can see where she is going with the breeding and the aim is to improve on each generation to ultimately compliment and improve on what we have currently, to breed a dog that is fit for its original purpose, for what it was originally bred for. The Borzoi was bred in Russia as a wolf hound, so it needs to be able to be swift and strong enough to pursue, chase and pin a wolf down.

The Borzoi today should also be able to do this; to have stamina and be agile, to twist and turn in the snowy terrain and be lithe and powerful. I enjoy the genetics side of it very much and took to the basics of it straight away when I was 15, what colours would be in a litter and what would benefit what in each pedigree. Mum and I sit down with a cuppa and have lengthy conversations about the next generation and the next steps of our breeding, we get the pedigrees out and look at them, look into the history of each dog and what is behind them that could potentially work alongside the other.

We are very proud to say that we have our beautiful dogs all over the world; Chili, Russia, Germany and the Netherlands and we have made some lifelong friends with their owners. Keeping up to date with them being loved and their success in their new homes is wonderful to see.

In 2004 we had Best of Breed with our gorgeous boy Manitias Silent Knight at Mischran, who went on and was shortlisted in the Hound group! That was just fantastic! What an honour and an achievement! We haven’t done that since, but I do dream about it … watch this space! 😊

We will be showing on Sunday this year, taking a young team of four for their first time at Crufts. We also have many of our breeding and relatives qualified also; it’s going to be great to catch up with friends and to celebrate our kennel and the achievements over the years.

Luther, my boy (golden child, because he does no wrong in my eyes) qualified last year, but I didn’t take him because he lost his puppy coat in the strangest of places, and looked as if he had a toupee on his withers!

Even though Crufts is a bit of fun, it is also the biggest dog show in the world with exhibitors and spectator from across the globe, I couldn’t have him seen not at his best!

It takes time, patience and preparation to ensure your dog is physically and mentally ready for Crufts. Food, grooming, exercise, training, and most of all, love and care goes into each one of our dogs. We took seven one year and it was a little manic; as I mentioned previously, it’s supposed to be enjoyable!

So, to those of you who have qualified and those just visiting I hope you have the best time and enjoy it as much as I do! Wish us luck! 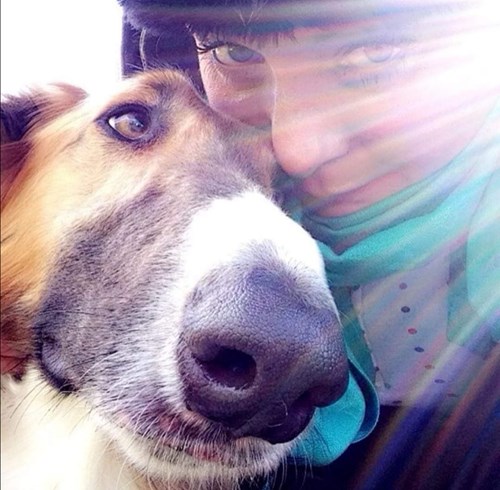